10 animal tests that should be replaced

Despite the acceptance by the European Union of replacement non-animal methods, these ten animal tests are STILL being carried out in Europe.

We have compiled this updated RAT List to highlight animal testing that could stop NOW in the EU.

Ending these ten tests could save the lives of three quarters of a million animals every year in Europe alone.

Over the last 30 years, there have been significant developments in the replacement of tests on animals for regulatory purposes. Non-animal methods have been developed that can now replace wholly, or in part, a number of animal tests across several product sectors.

However, our experience has been that actually replacing the animal tests takes much longer than it should. This is unacceptable. In recent years, alternatives to animal tests including skin irritation, skin sensitisation and various batch safety tests have taken years to be completely accepted and, in many cases, the animal tests are still being conducted to meet legal requirements.

This needs to stop NOW in the interests of animals and better science!

Not only are non-animal methods usually cheaper, faster and more accurate than the animal tests they replace, but EU laws on animal experiments demand that countries do not authorise the conduct of an animal test if another method or testing strategy for obtaining the result sought, not entailing the use of a live animal, is recognised under EU rules. In many cases, the problem lies with lack of enforcement by the authorities and the absence of a joined-up approach to acceptance of non-animal tests around the world. 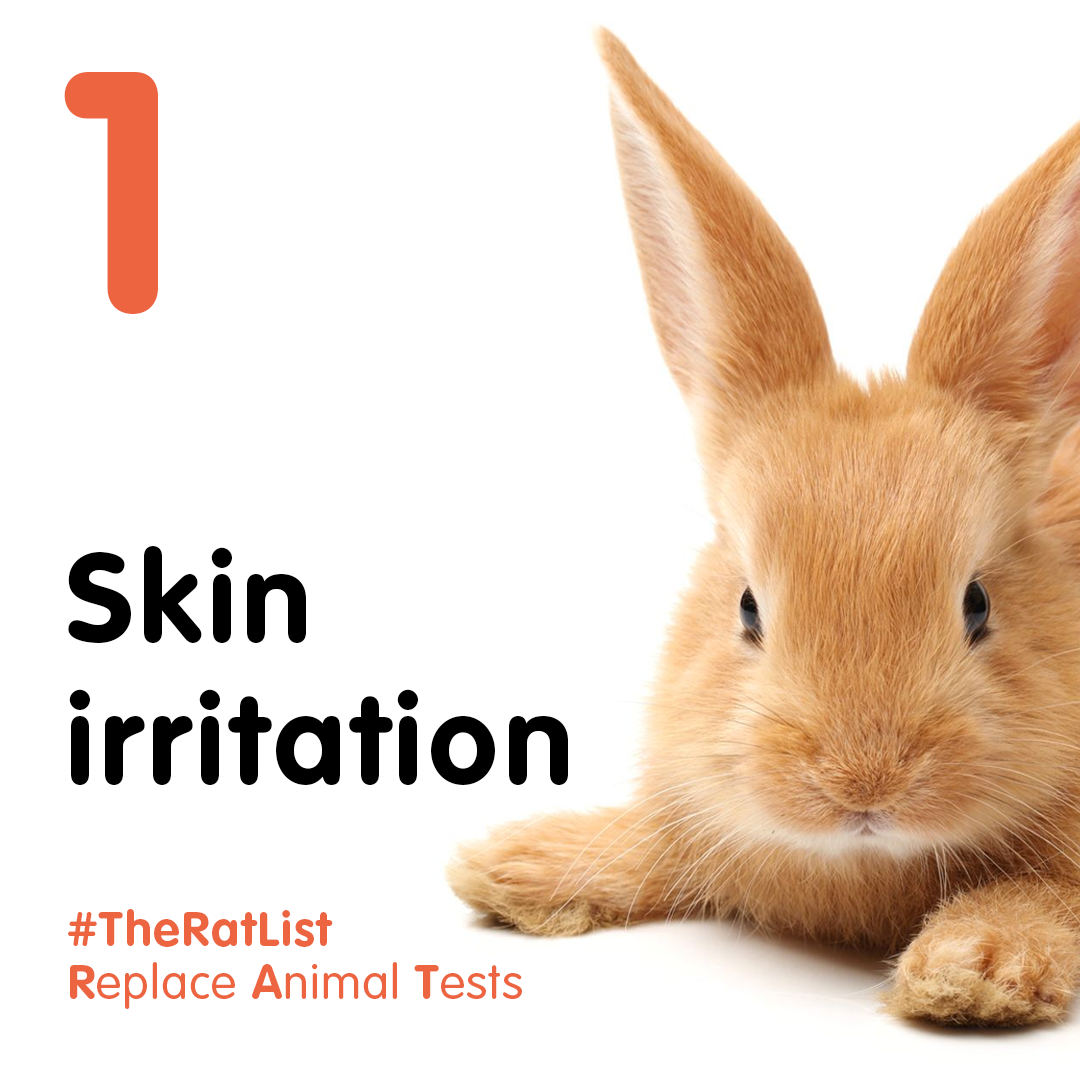 Mostly rabbits
Number of tests in the EU: 4,120
Product test is used for: Chemicals
A test substance is rubbed on to a 6cm area of a rabbit’s shaved skin and held in place with a bandage for four hours. The rabbit is then examined for signs of skin damage for 14 days. If there are no signs of irritation, two more rabbits are used in a confirmatory test. Rabbits are singly housed and can suffer from painful skin reactions and rashes.
Replacement method:
Reconstituted human skin models can be used in most cases. They are more predictive than the rabbit test. 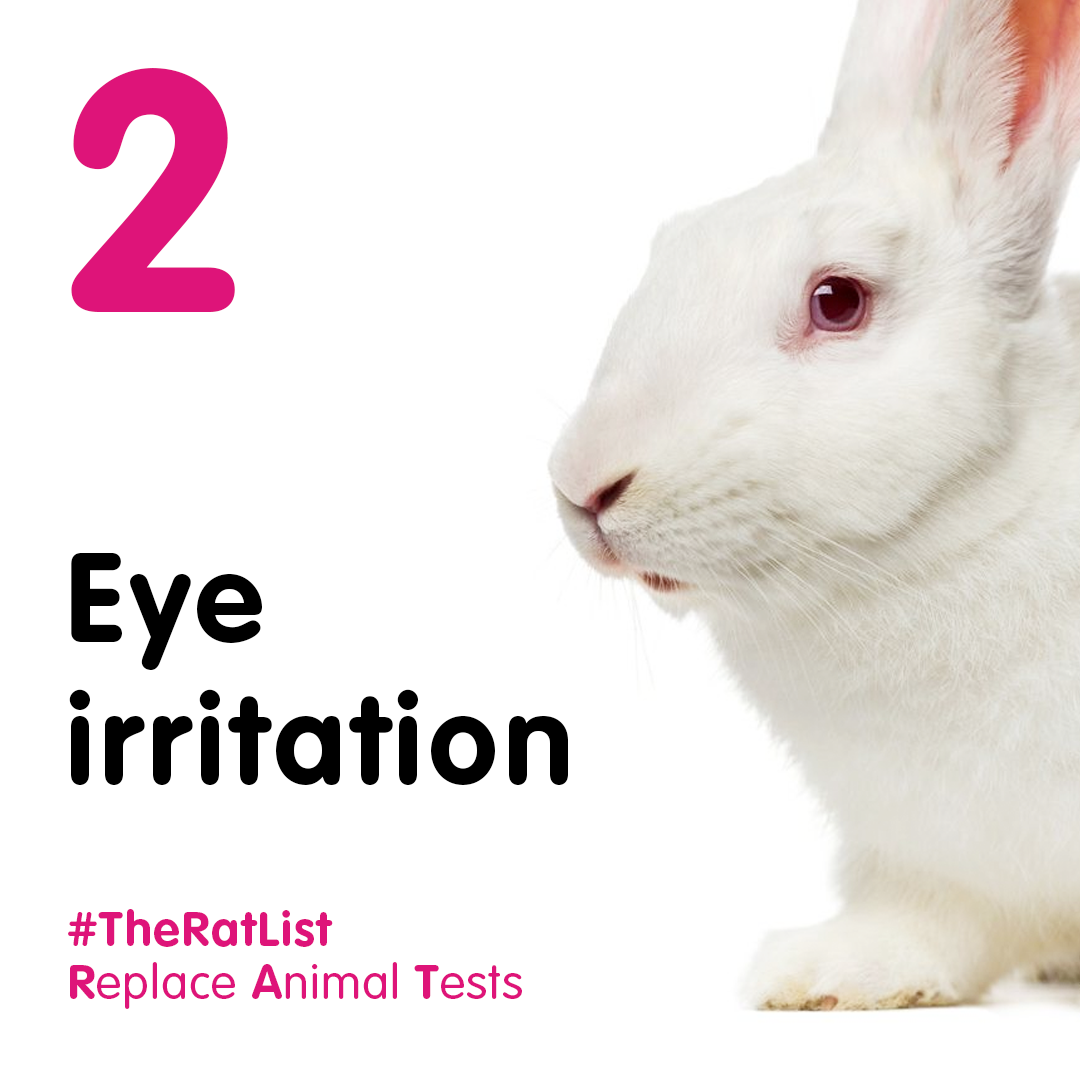 Rabbits
Number of tests in the EU: 814
Product test is used for: Chemicals
A test substance is placed in the eyes of live rabbits and left for at least one hour before being washed out. Their eyes are then examined for signs of irritation and damage over three days. If there are no signs of severe irritation in the initial test, two more rabbits are used in a confirmatory test. Rabbits are singly housed and can experience painful damage in their eyes that can lead to blindness.
Replacement method:
Reconstituted human eye models can be used to detect non-irritants. Eyes from hens and cows killed for food can also be used to identify severe irritants and non-irritants. 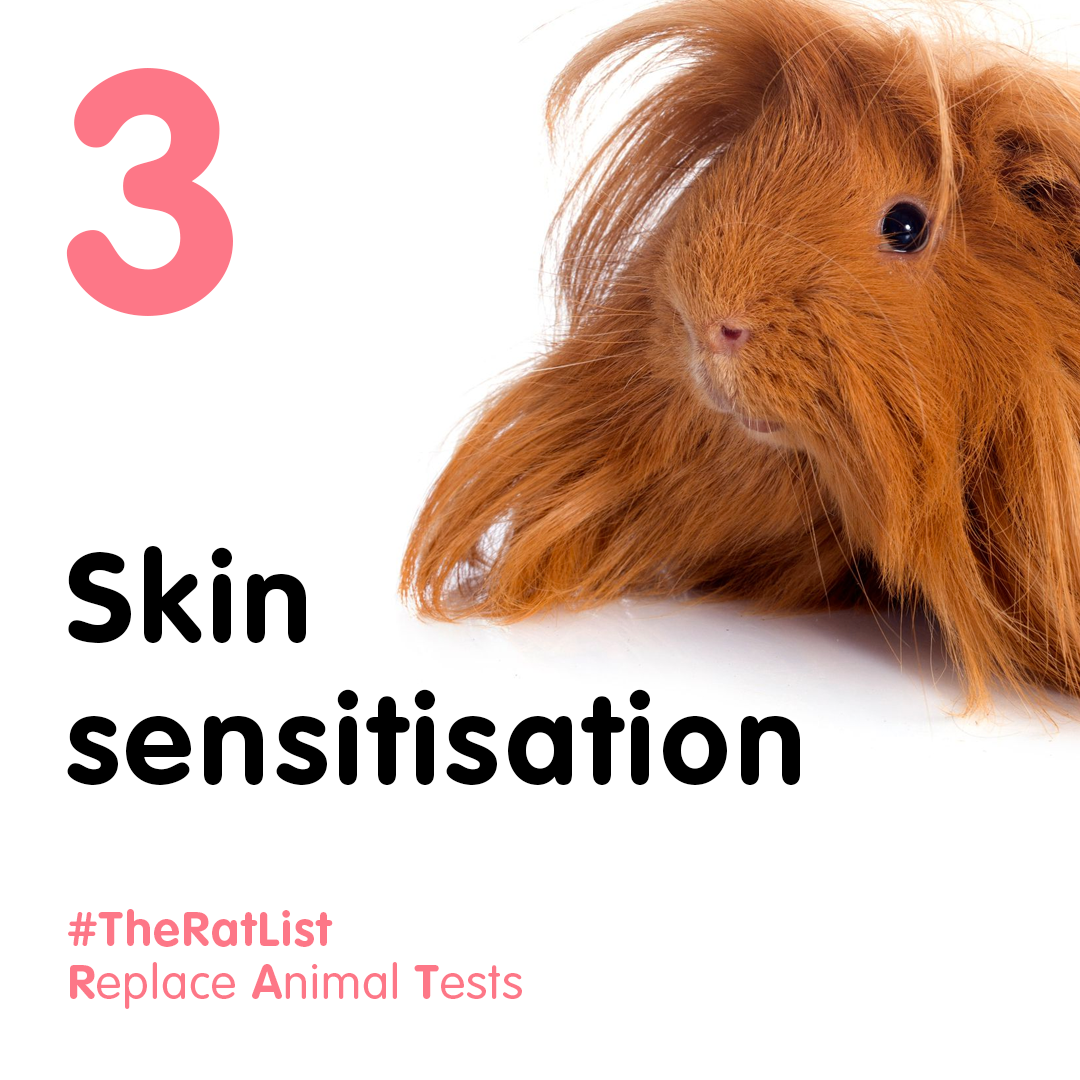 Mice, guinea pigs
Number of tests in the EU: 47,341
Product test is used for: Chemicals
A test substance is rubbed on to the shaved skin of guinea pigs who are then observed daily for signs of an allergic reaction for almost a month. They may suffer from painful skin reactions and rashes. In the LLNA test, a substance is painted on to the ears of mice every day for three days. The mice are then killed three days later, and their ears are dissected.
Replacement method:
Several in vitro tests can be used in combination, including the peptide reactivity (DPRA) test which measures the binding of a substance to proteins, the keratinocyte assay, and the human Cell Line Activation Test (h-CLAT) based on human skin cells. 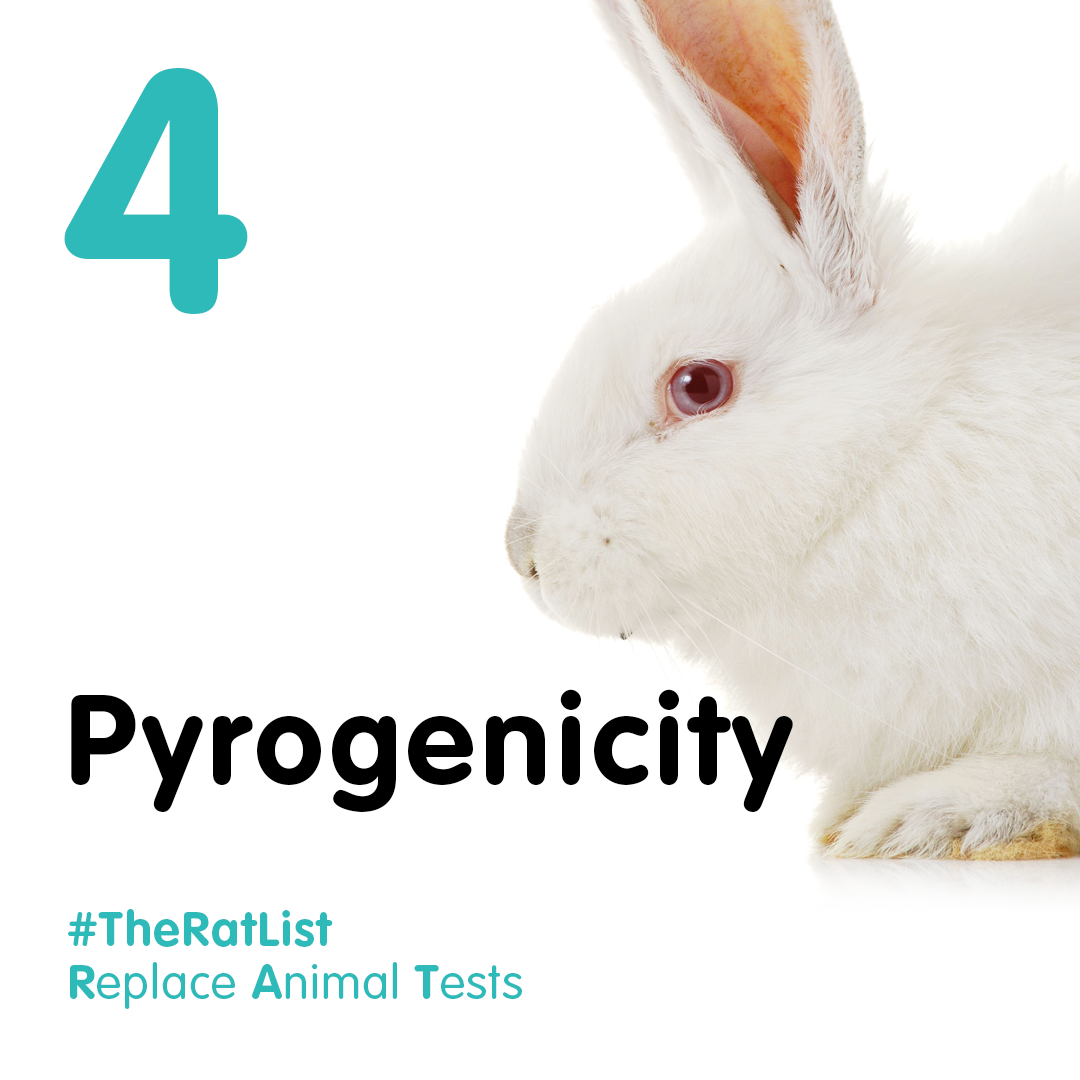 Rabbits
Number of tests in the EU: 35,172
Product test is used for: Medicines
Rabbits are restrained in boxes for up to eight hours per test, with food and water restriction prior to this. They are injected with a test substance into a vein in their ears which often causes damage, and temperature monitoring through probes inserted deep into their rectums.
Replacement method:
A test that uses human cells – the monocyte activation test (MAT) was developed in the 2000s. The MAT works by measuring the immune response of human cryo-preserved blood to a test substance. Another test using blood from horseshoe crabs (LAL) can also be used instead of the live rabbit test 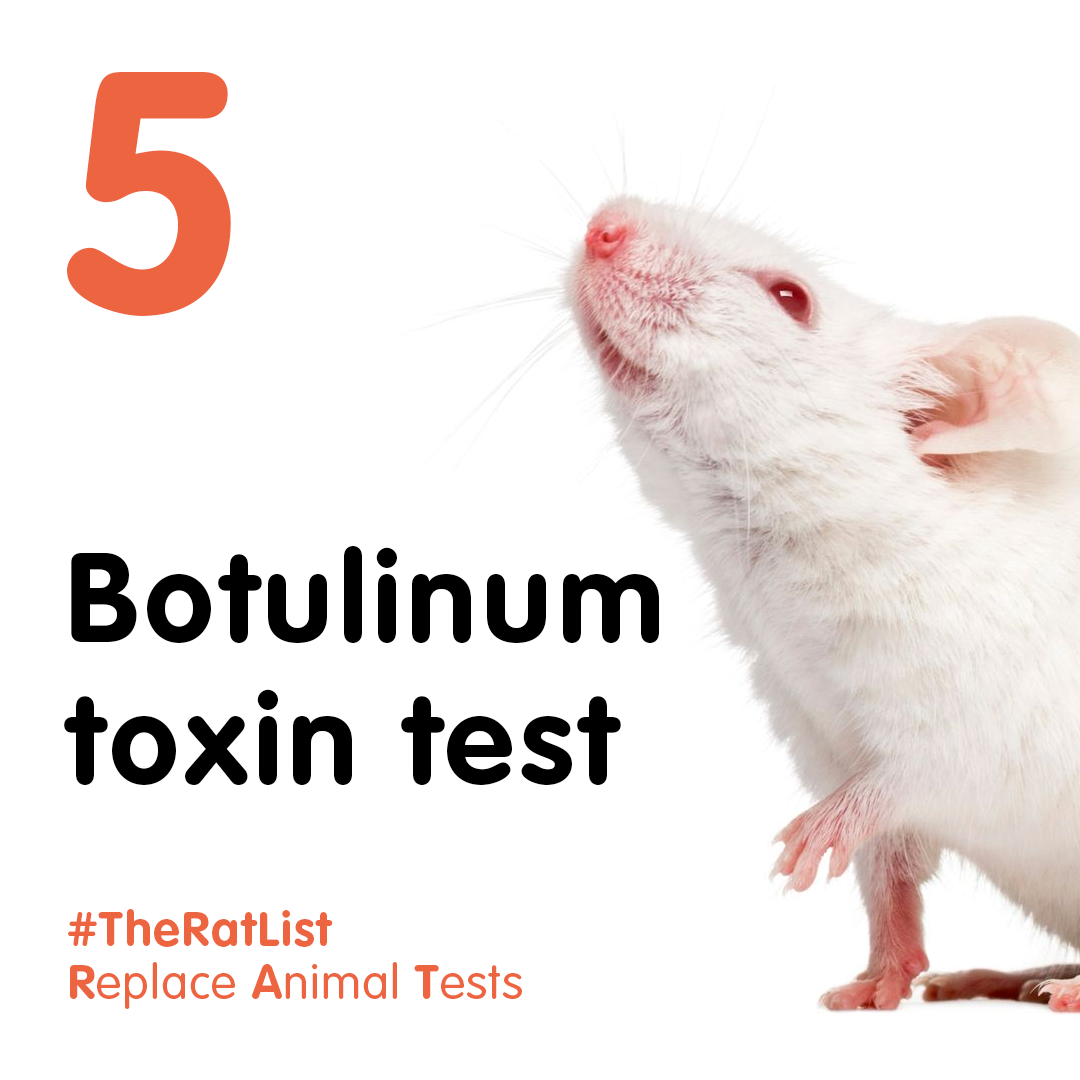 Mice
Number of tests in the EU: 400,000*
Product test is used for: Medicines (human)
Mice have an injection into their abdomens with the botulinum toxin and over the next three days, become increasingly paralysed. If left, mice in the higher dose groups will suffocate to death within approximately three days. Approximately 50% of the mice per test die. The rest are killed at the end of the test anyway.
Replacement method:
The major toxin manufacturers have now developed a cell-based test to replace the batch test for their botox products. 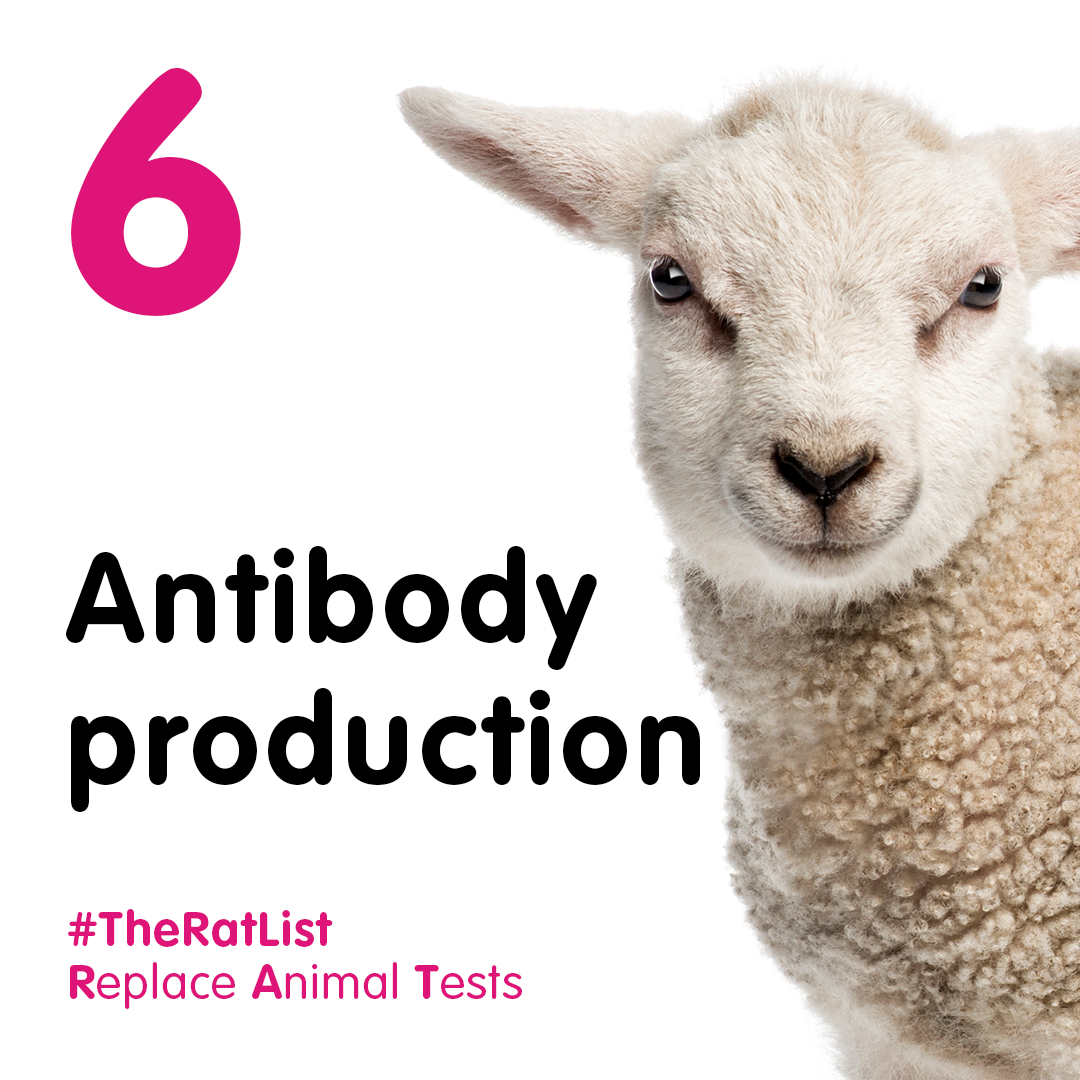 Mice, rabbits, sheep, goats
Number of tests in the EU: 200,000*
Product test is used for: Medicines (human and vet)
Animals, including mice, rabbits, sheep and goats are used as ‘factories’ to generate large numbers of antibodies. The process involves injecting animals with a substance that stimulates the immune system to produce specific antibodies. The animals often suffer from harmful side effects before they are eventually killed months later to harvest the desired antibodies.
Replacement method:
Phage-display technology’ can be used to produce a wide range of antibodies that are of higher quality, more stable, more relevant, and more reproducible than the antibodies produced in animals. They are also much faster and cheaper to produce. 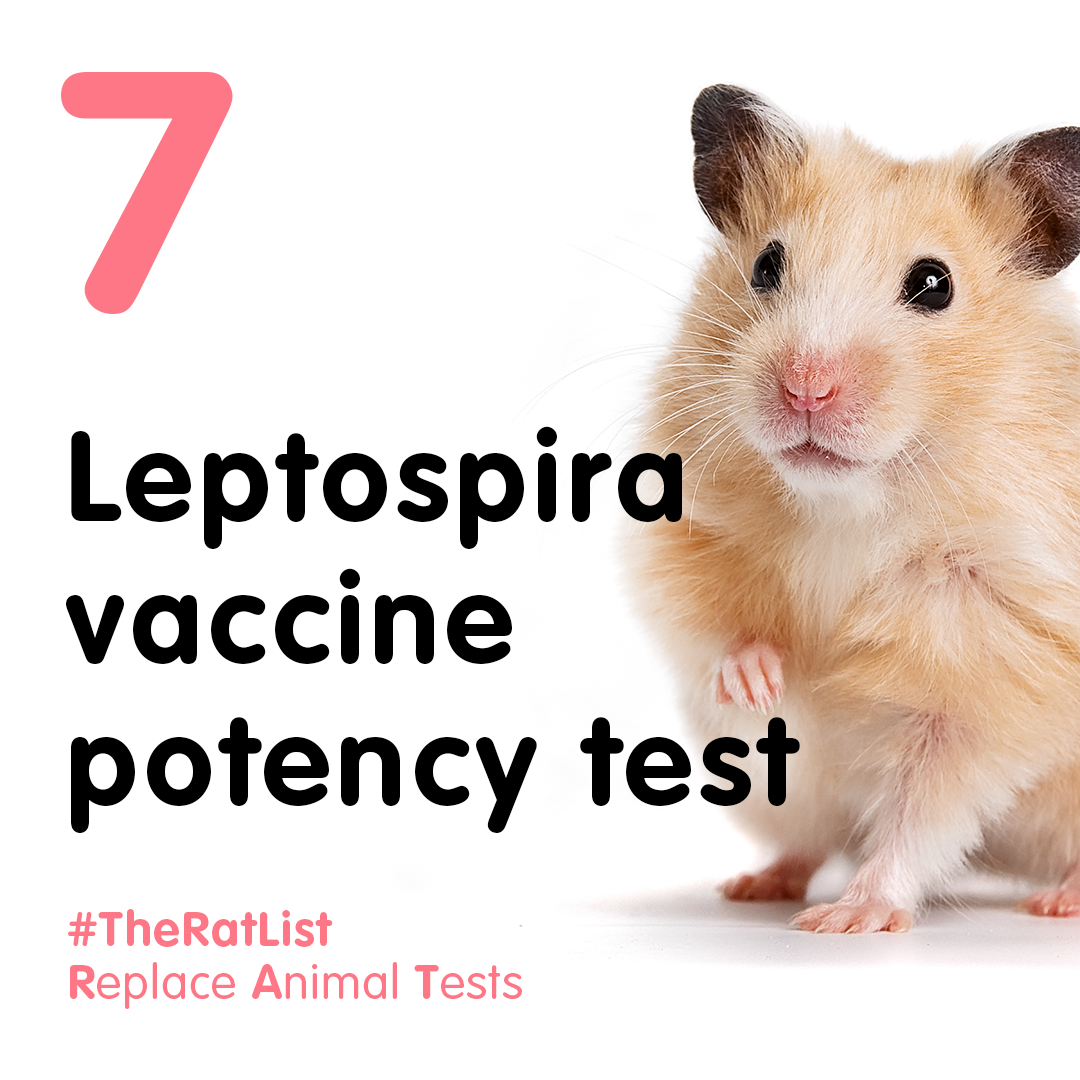 Hamsters
Number of tests in the EU: 3,826
Product test is used for: Medicines (vet)
Hamsters are first injected with the vaccine and then, up to 30 days later, Leptospira bacteria is injected into their abdomens. For the batch to pass the test, 80% of the vaccinated animals must survive while 80% of the unvaccinated animals must die or show symptoms of infection, which includes bleeding internally and from the nose.
Replacement method:
Enzyme-linked immunosorbent assays (ELISAs) are rapid immunological tests that can be used to detect specific antigens or antibodies. ELISAs have been developed and validated to replace the potency test in hamsters. These tests are more reliable and predictive than the hamster test. 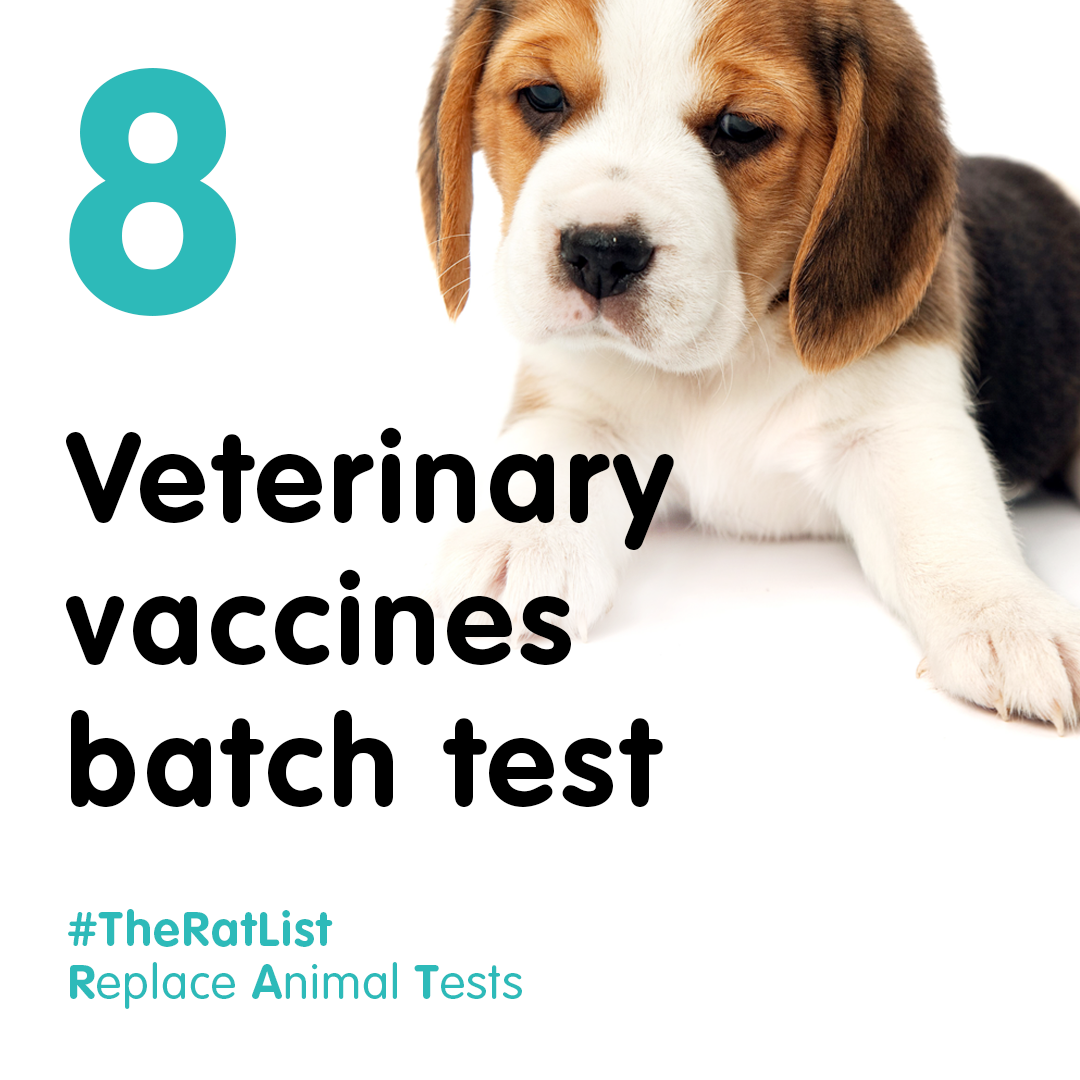 Can include mice, farm animals, dogs, cats
Number of tests in the EU: 5,000*
Product test is used for: Medicines (vet)
Animals are injected with two doses of an inactivated vaccine or ten doses of a live vaccine and then observed for at least two weeks.  Animals can suffer painful reactions in the rare occasion the batch is contaminated and as a result of large injection volumes relative to the animals’ size (young animals are often used).
Replacement method:
Improvements in the manufacturing process of vaccines have made animal batch tests redundant. In vitro tests are also used as part of a ‘consistency approach’ to ensure that each vaccine batch is similar i.e. consistent to a previously tested batch. 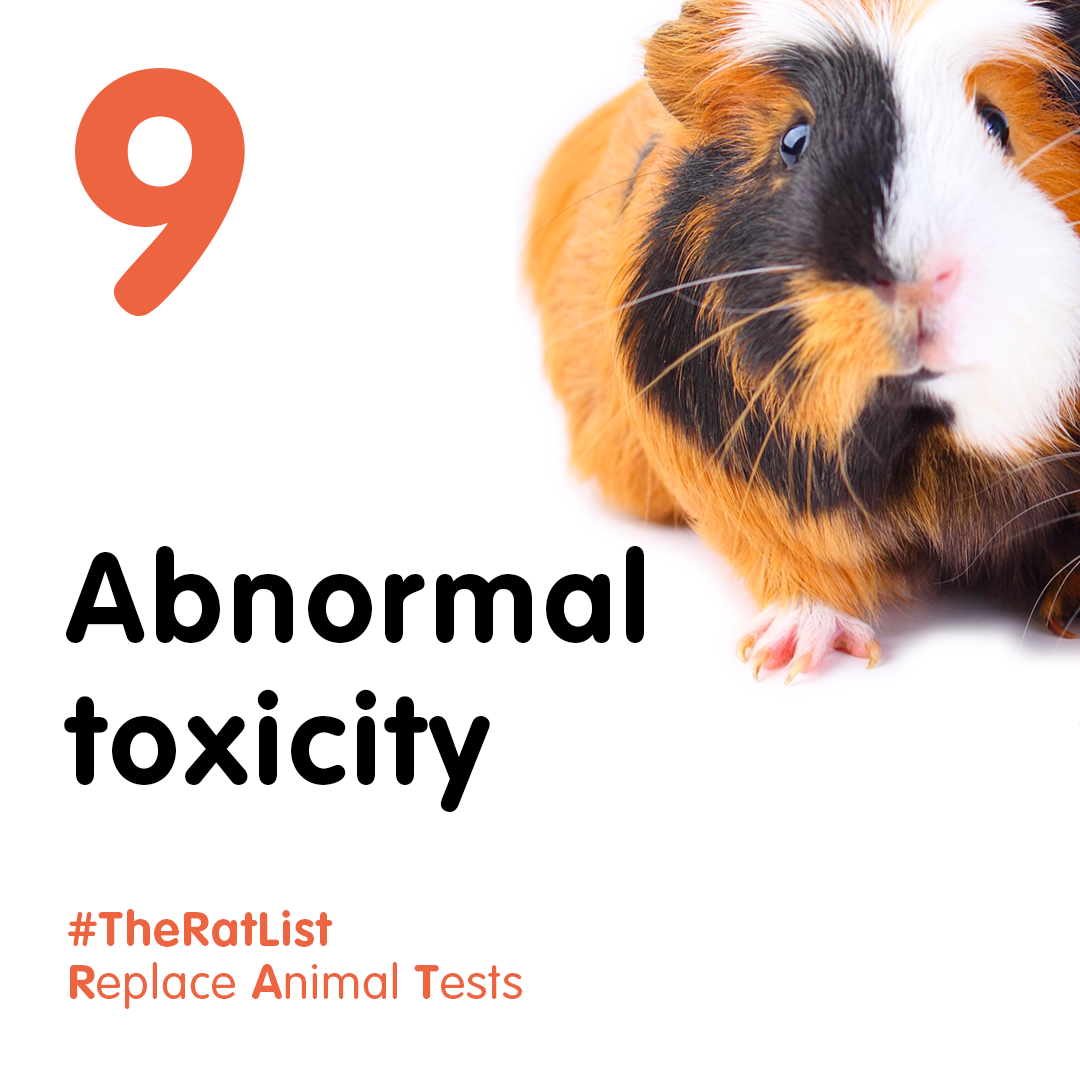 Mice and guinea pigs
Number of tests in the EU: 25,000*
Product test is used for: Medicines (human)
Animals, typically mice, and guinea pigs, are injected with a biological product (e.g. vaccines, sera, antibodies) and observed for signs of local and systemic reactions for at least seven days. If one of the animals dies or becomes ill, the test will be repeated a second time.
Replacement method:
Improvements in the manufacturing process of biological products and post-market surveillance have made animal batch tests redundant. In vitro tests are used as part of a ‘consistency approach’ to ensure that each vaccine batch is similar i.e. consistent to a previously tested batch. 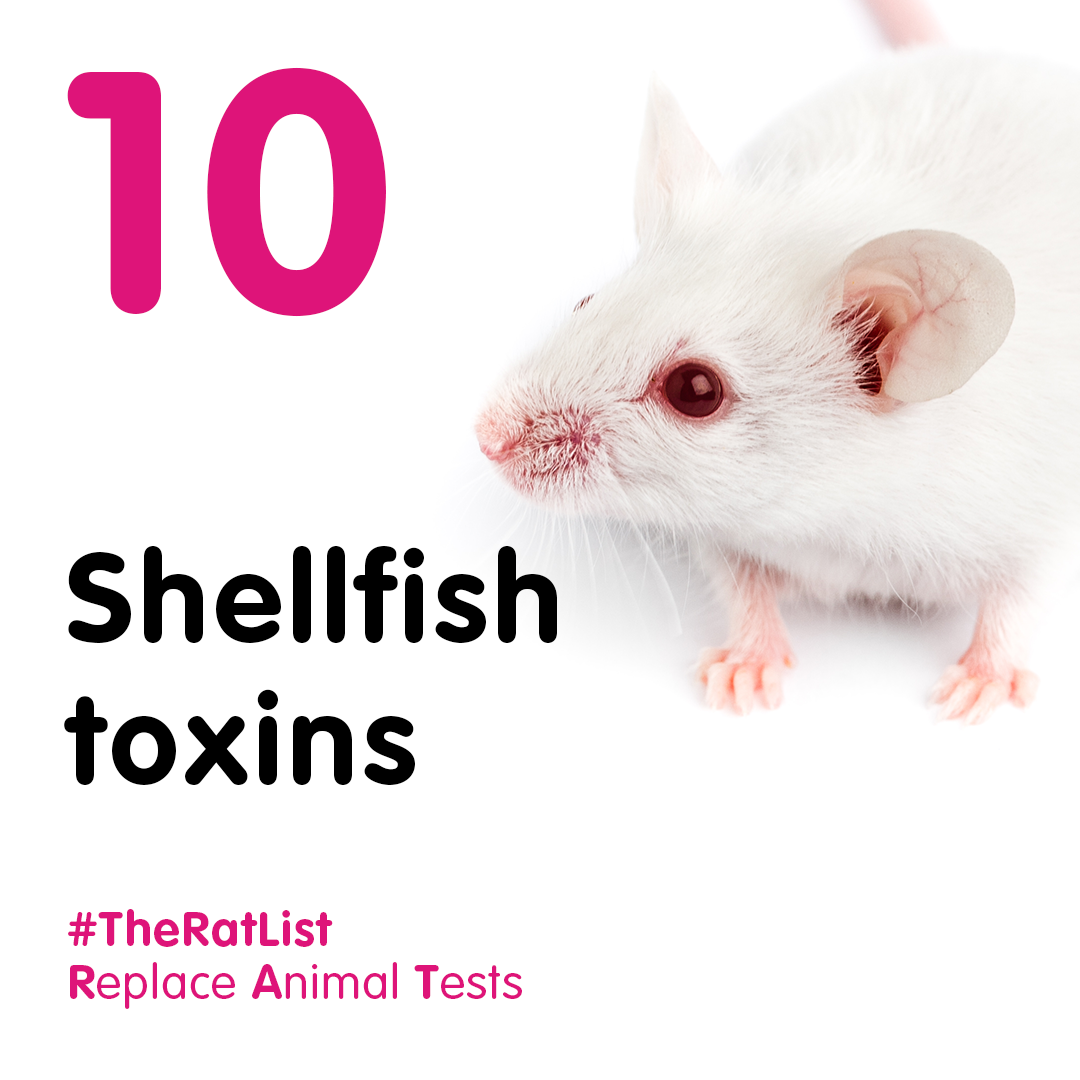 Mice
Number of tests in the EU: 41,151
Product test is used for: Food
Extracts from shellfish are injected into the stomachs of mice and the time until they die is recorded. If two thirds of the mice die within 24 hours, the shellfish is deemed unsafe for humans.
Replacement method:
Analytical chemistry methods (HPLC and LC-MS/MS methods) can be used to check for the presence of paralytic shellfish toxins (PSP), amnesic toxins (ASP) and lipophilic toxins (DSP).

Notes: Numbers are the number of tests (not animals), taken from the official EU statistics for the year 2017 unless indicated by * (estimate available upon request) Total number of tests = 762,424 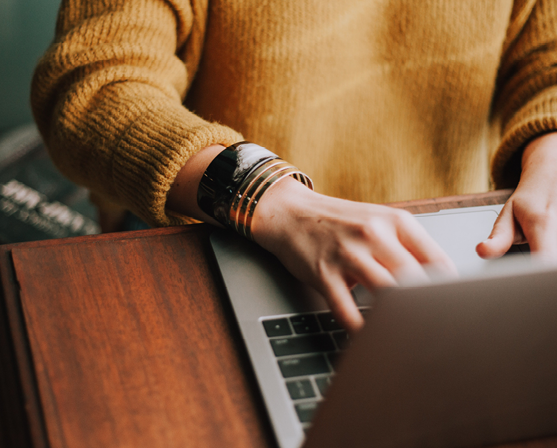 Our plan to end animal experiments in the EU 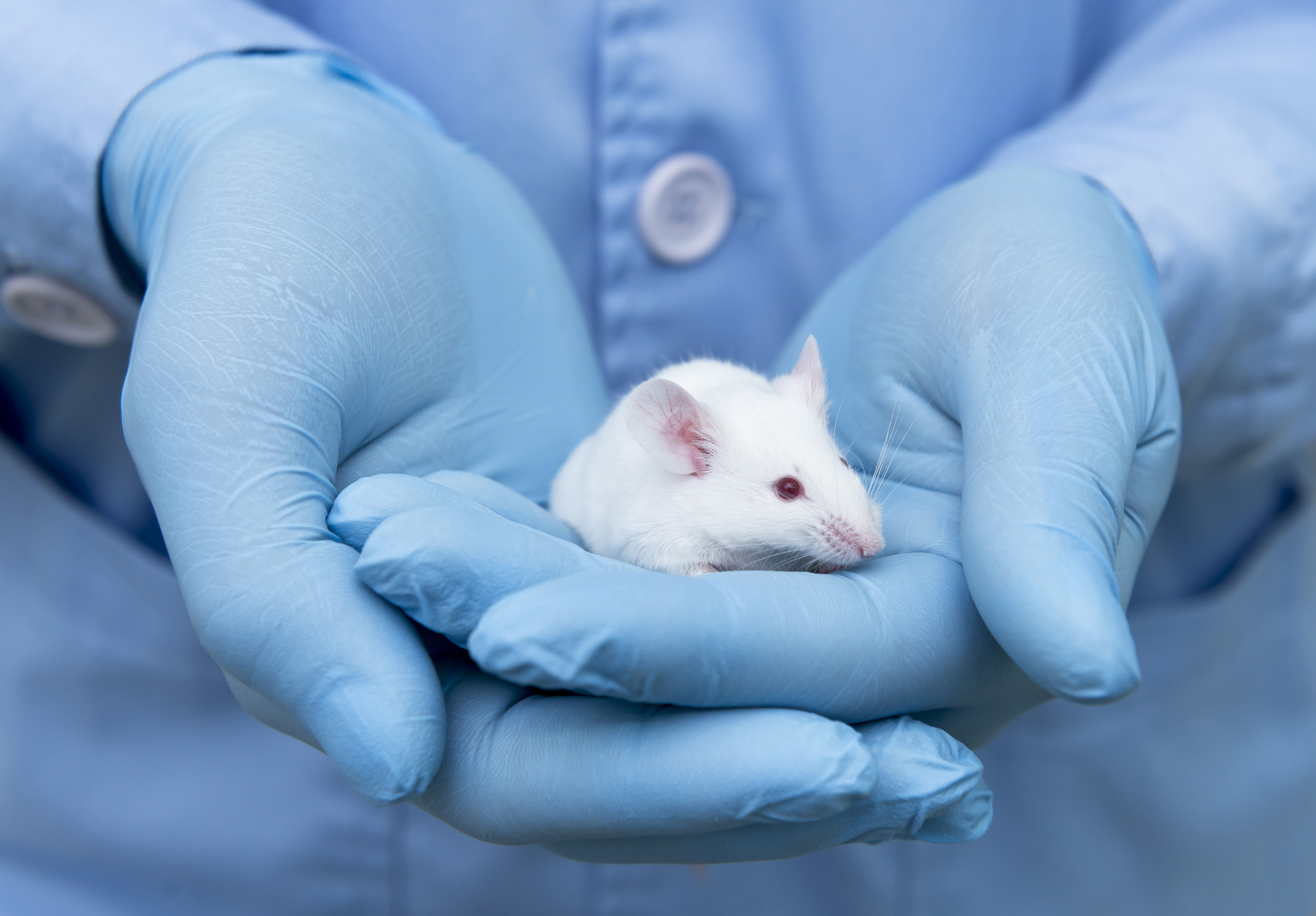